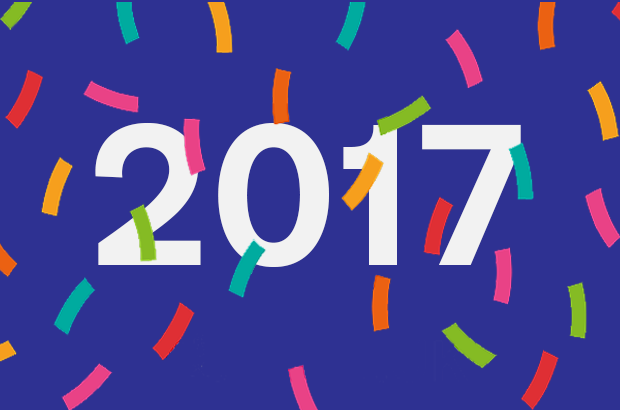 It’s that time of year when our thoughts turn to what we’ve achieved during the last 12 months, and what we want to do during the coming year.

2017 has been an incredibly busy year in DVSA’s content design team. We want to share some of our highlights with you.

So sit back, relax, and hopefully some of the work we're most proud of will give you some inspiration for 2018.

We designed graphics and short videos to promote our consultation about improving moped and motorcycle training.

They helped it become our consultation with the highest proportion of mobile and tablet views ever - 74% of views came from a mobile or tablet, and we received over 2,200 responses to the consultation.

After months of hard work and assignments, one of our content designers, Grant Chappell, was awarded with a Plain English diploma.

We marked one million downloads of our official DVSA learning apps. They've had some amazing reviews along the way, and our theory test iOS app now has a 4.7 star rating.

We designed a leaflet to help everyone in our Operations and Enforcement teams to understand how the agency was restructuring to better support them.

We filmed, animated, edited and published a new video about how compulsory basic training (CBT) for riding a moped or motorcycle works.

We took the PDF of the national standard for driving cars (the document that sets out what you must know and what you must be able to do to drive safely) and converted it into the GOV.UK manual format.

DVSA’s GOV.UK content designers went to the 5th cross-government content conference - ConCon5 - in London. They were warned by customer experience expert Gerry McGovern about top tasks being ignored because the tiny tasks take over.

Hazard perception in the learning zone

Users can now prepare for the hazard perception part of the theory test on the official DVSA learning zone - a partner website delivered by Williams Lea Tag.

We designed DVSA's 5-year strategy and published it on GOV.UK as an HTML publication and a PDF. We also made hard copies available for our staff. It's now used as the good practice example of HTML publications in the government's content design guidance.

To help communicate it, we designed a leaflet for our staff, stickers, banners, and social media assets. We also published HTML and PDF versions of our business plan for the year.

We scripted, animated, edited and published a video summarising our 5-year strategy, to help everyone understand what we’re doing to help people stay safe on Britain’s roads.

We designed a news story about the changes to the driving test. It's gone on to become the most read government news story of 2017, with over 1.5 million page views.

We filmed, edited and published a video explaining how the new test would work, which went on to get over 150,000 views.

We also designed social media assets - including a Facebook canvas -  to help our External Communications team spread the word.

The pre-election period meant that we were able to spend some time 'behind the scenes' working on things that were to come later in the year - but no new content was published during this time.

We're working with the Government Digital Service (GDS) to make it easier for users to find what they need on GOV.UK. To achieve this, we are:

To help understand what users need from us, we went with GDS to the homes of 2 driving instructors and 2 MOT testers to interview them about their day-to-day roles. It also gave us a great insight into how they describe things, and the type of language they're likely to use when searching and navigating. 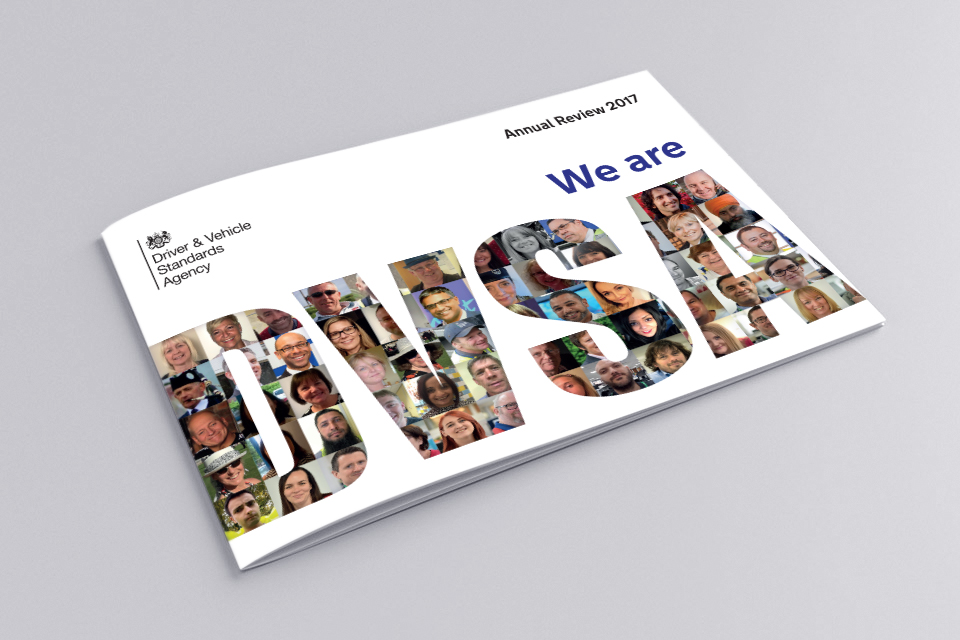 We designed and published ‘We are DVSA’ - our first annual review. It summarises some of the great stories of what our staff achieved during the previous year.

We designed and built a training package for driving examiners to help them understand the changes to the test. The online package included videos, diagrams and illustrations.

User research at the GDS lab

Continuing our work to improve content on GOV.UK, we attended a full day of user research interviews at GDS.

We listened to experiences of drivers, driving instructors and transport managers, and watched them do some basic usability testing exercises.

Don't take it out on our staff

We designed posters and a news story to help make the message clear that we won’t stand for anyone taking it out on our staff. Sadly, some our staff are verbally or physically attacked for just doing their job.

We also designed a poster to help staff understand what they can do to protect themselves and their colleagues. The campaign picked up national media attention.

On the subject of posters, we redesigned the posters displayed in driving test centre waiting rooms.

The previous black and white posters were replaced with full-colour posters designed using our 5-year strategy branding. They’ve already made waiting rooms much more welcoming, and they do a much better job of signposting our online services. 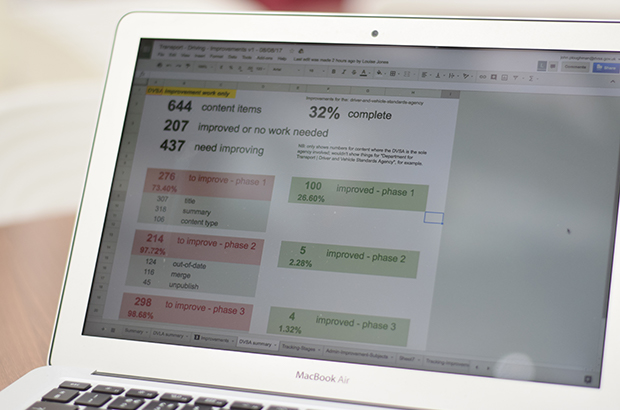 We audited around 900 pieces of DVSA, Driving Standards Agency and Vehicle and Operator Services Agency (our predecessor organisations) content on GOV.UK. We checked their titles, summaries, format and whether they duplicated other content.

We’ve identified around two-thirds that we think that we can improve. 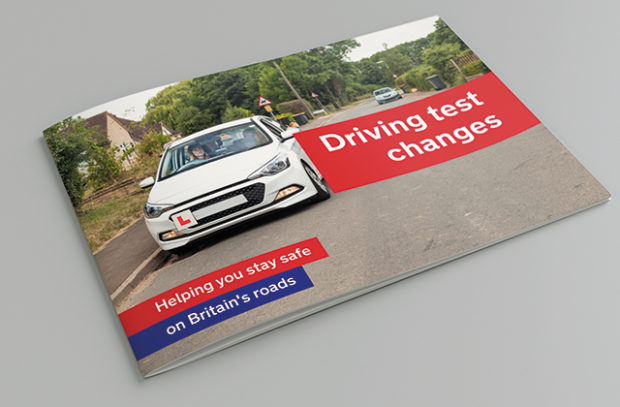 We designed a handbook to send to around 40,000 driving instructors about the changes to the driving test. It pulled essential information into one guide that they can keep with them in the car.

The handbook also encouraged them to sign up for our email alerts and to visit our Despatch blog for driver and rider trainers. As a result, 735 people signed up for email alerts, joining the thousands who were already getting them.

Show me, tell me videos

During your driving test, you’re asked 2 vehicle safety questions known as the ‘show me, tell me’ questions.

As the driving test was changing, we filmed, animated and edited 2 new videos about these questions, to make sure new drivers know how to carry out basic safety tasks.

We designed and published a guide about the pilot of DVSA earned recognition for vehicle operators - a new way to prove you meet driver and vehicle standards.

It’s helped more vehicle operators understand how it works and encouraged them to join the pilot.

We designed a news story about changes to fines for breaking drivers' hours. If you drive a lorry, bus or coach, you must follow rules on how many hours you can drive and the breaks you need to take.

From the data we collect, we know it's a particular problem with drivers from Bulgaria, Spain, Poland and Romania. So we worked with our External Communications team and arranged translations of the story in Bulgarian, Spanish, Polish and Romanian to make sure drivers and operators from those countries are aware of the changes.

Sarah Scott, Deputy Head of Publishing, was awarded a Plain English diploma after months of hard work, assignments and training.

We started work on improving the titles and summaries of content on GOV.UK that had been identified by our audit earlier in the year.

Here's how we're making titles and summaries as clear as possible, without making it difficult for users who might know the unusual terminology.

We attended ConCon 6, networking with other content designers from around government and learning from what others have been doing. Check #govcontent to see great examples of what’s being done.

There are already over 270,000 users signed up to get free reminders by text message or email.

Grant Chappell blogged about his experience of taking the 5-day user research fundamentals training course - a course he says will change the way you work.

Setting up our design studio in Bristol

The space a team works in is a tool. It’s just as important as the choice of design software. So we're excited that we now have a dedicated content design space in Bristol that we're building to meet the needs of the team.

The way that 2 of the 3 tests people take to qualify as an approved driving instructor (ADI) work will be improved from 23 December 2017.

We designed and published a news story about the changes, worked with GDS to update the guides about the ADI part 2 test and the ADI part 3 test, and updated other forms and documents along the way.

We'd also updated 'the official DVSA theory test for approved driving instructors' product to reflect the changes earlier in the year, so people qualifying have every chance of being prepared. 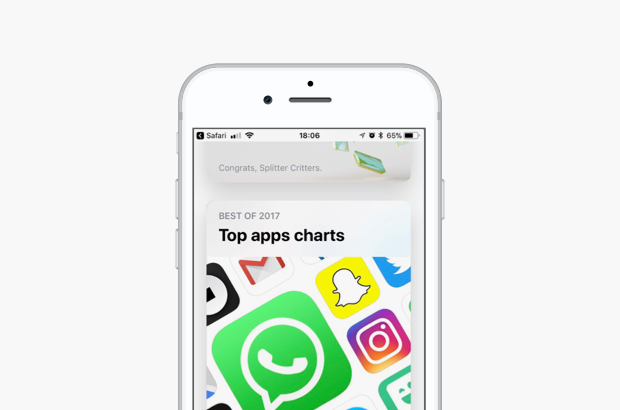 On 8 December 2017, Apple revealed the most-downloaded apps of 2017. We were delighted that the official DVSA theory test kit was at the top of the paid-for apps chart.

We made sure that GOV.UK and our YouTube channel was updated as we moved into the early hours of 4 December 2017, as the way the driving test works changed.

We visited Network Rail to find out more about how their design team works, and to get some ideas about our new design space.

Following ConCon6, we also visited Ofsted to find out more about 'Clearly Ofsted' - their campaign for clear writing throughout the organisation. We hope to adapt this and roll it out across DVSA.

These are just some of the highlights. During the year the team has dealt with over 640 content requests from people in DVSA.

That’s everything from a minor change of an email address on GOV.UK, through to designing or filming things that you’ll get to see 2018.